Here we are – in the smallest country in the world! The modern history of the Vatican is summarized well in Lonely Planet: Europe on a Shoestring, pp. 641-642:

Covering just 0.44 sq km, the Vatican is all that’s left of the papal States. For more than a thousand years, the papal States encompassed Rome and much of central Italy, but after Italian unification in 1861 the pope was forced to give up his territorial possessions. Relations between Italy and the landless papacy remained strained until 1929 when Mussolini and Pius XI signed the lateran Treaty and formally established the Vatican State.

St. Peter’s Basilica, the greatest church on earth, which now stands erect inside the Vatican, was first built by Constantine to commemorate the crucifixion of St. Peter (one of the twelve disciples of Jesus) under the tyrant Nero (c. 64-67 CE). 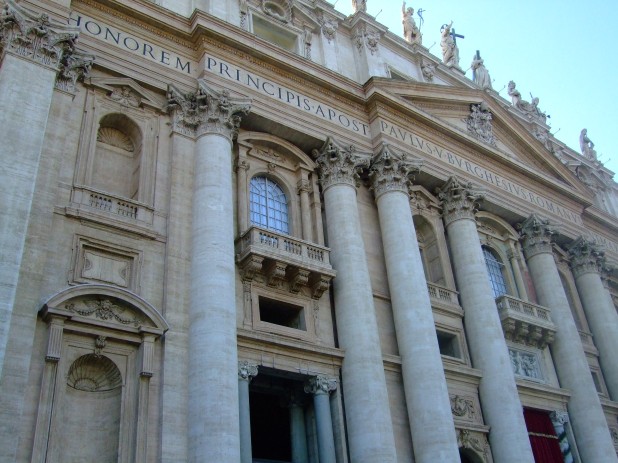 Around St. Peter’s Basilica are those Swiss Guards dressed in colorful uniforms. According to the guide book, the prerequisites for choosing those guards are moral reliability, physical integrity and aesthetic appearance. I wonder why the very last criterion is required to be a Swiss Guard?? 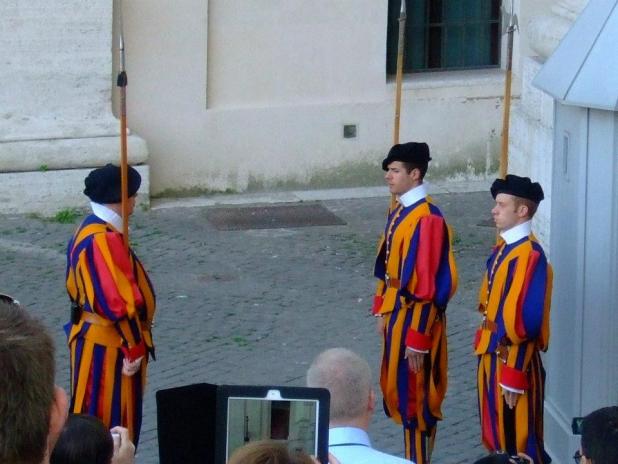 Inside the basilica sits one bronze statue of St. Peter, attributed to A. di Cambio.

The Statue of St. Peter

The most eye-catching masterpiece in the basilica is the Chair of St. Peter constructed by Gianlorenzo Bernini. It is festooned with gigantic figures of two Fathers of the Latin Church and two figures of the Greek Church. It is topped with a round window full of light with a figure of dove representing the Holy Spirit surrounded by a nimbus of angelic figures. 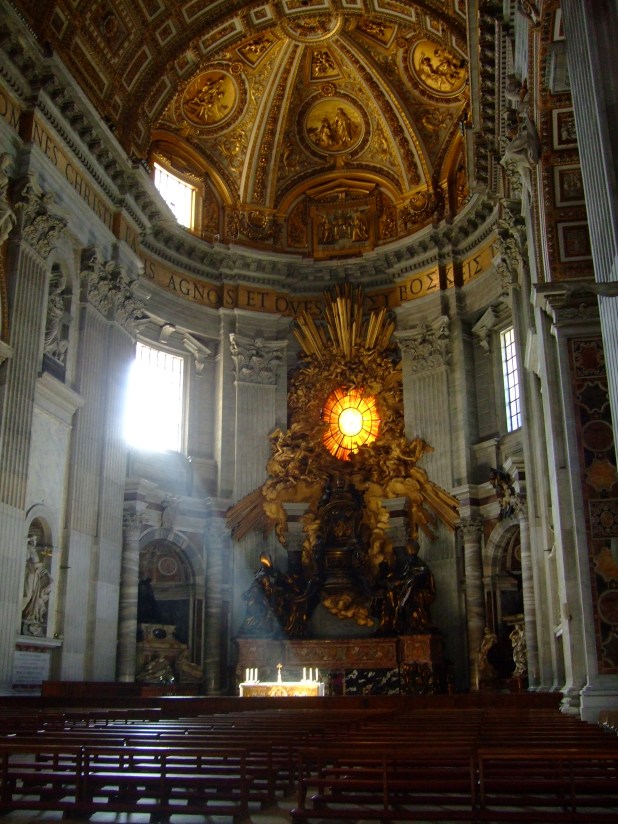 The Chair of St. Peter

The interior of Michelangelo’s dome soars above the baldachin covering St. Peter’s grave. 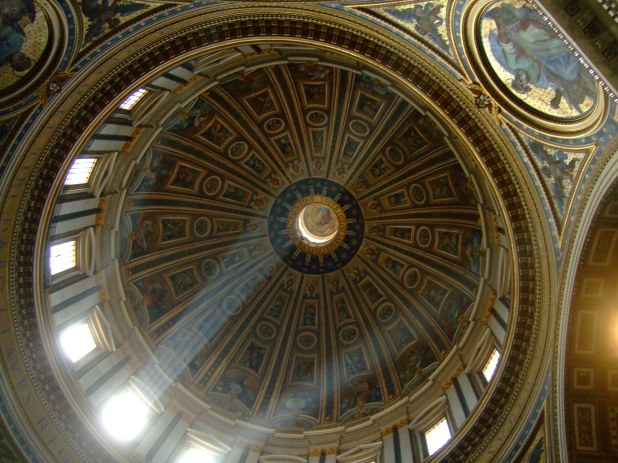 You can climp up the Dome and look down on the cavernous interior of the Basilica. The people underneath look like tiny ants 😉 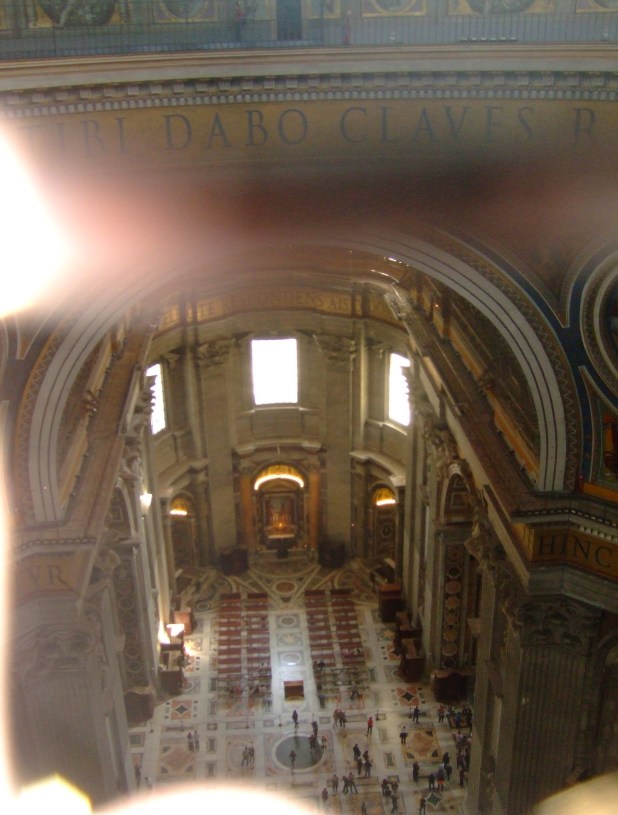 The interior of St. Peter’s Basilica

Outside of the Dome is the spacious St. Peter’s Square designed by Bernini and laid out in the 17th century. The two semicircular colonnades on each side of St. Peter’s Square symbolize, in the words of Bernini, “the motherly arms of the church.” 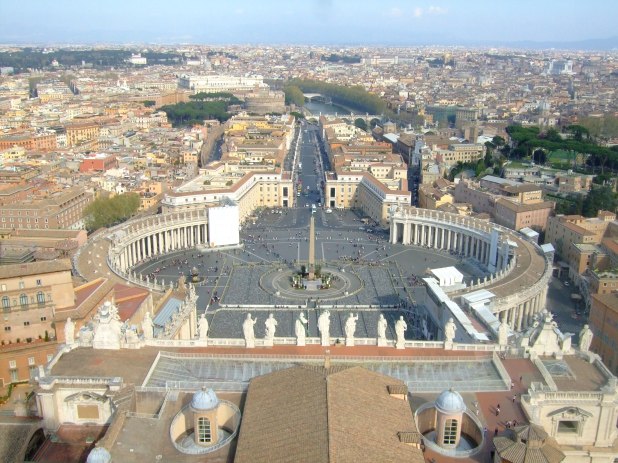 Outside of the Dome

We could see Castel Sant’Angelo from up here. It does not really look like a castle. initially it was created by the Emperor Hadrian as his tomb. According to the guidebook Rome and the Vatican: Discover the Archaeology, Monuments and Churches of Rome, there is a legend concerning the name Castel Sant’Angelo, which dates to the 12th century:

During a solemn procession in 590 by Pope Gregory the Great to beseech the Virgin to put an end to the plague that was devastating the city, an angel appeared in the sky and came to rest atop the Mausoleum, sheathing his sword as a sign that the plea was being answered. A chapel was then built in honor of the Angel, and later a statue was added to evoke the miracle. The building’s name was then changed to recall the event.

In front of the Castle are 10 angelic statues holding instruments of the Passion. Two of the original statues were made by Bernini, but are now placed in another church (Sant’Andrea delle Fratte). Those two on the bridge are now copies of the orginal ones. 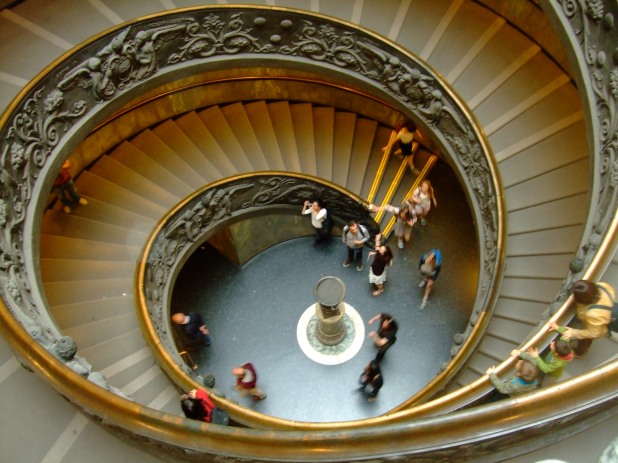 The climax of the journey in the Vatican Museums is the Sistine Chapel, which was named after Pope Sixtus IV. In 1508, Pope Julius II commissioned Michelangelo to decorate the Chapel. Between 1508 and 1512, the artist painted the ceiling with the episodes from Genesis, narrating the story from the creation of the world to the fall of mankind. 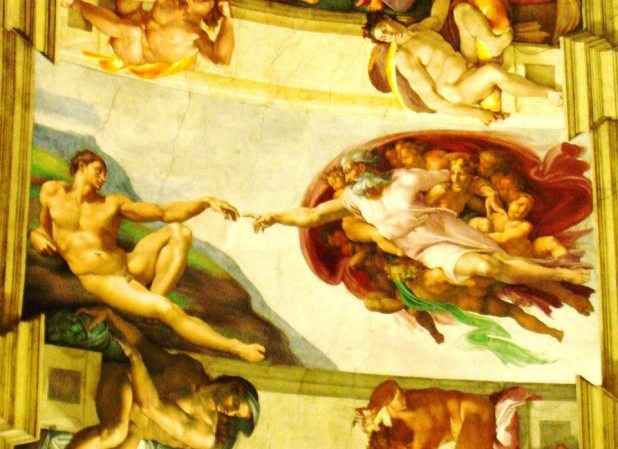 The Creation of Adam

23 years later Micheangelo returned and painted the Last Judgment on the wall behind the altar (1535-1541). One of the characteristics of the fresco is that Jesus is depicted as very muscular and every one including the angles are shown as fleshy (e.g. without wings). It is to emphasize the centrality of body/incarnation of Christ. This judgment scene is based on/related to Dante’s Divine Comedy. 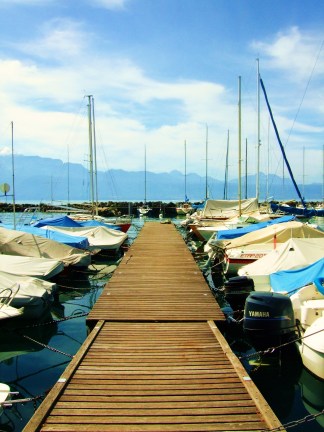 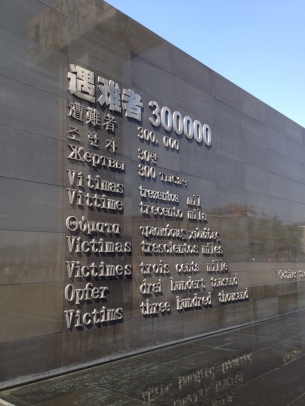 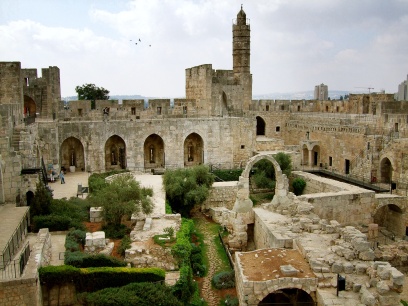 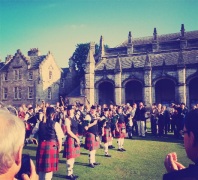 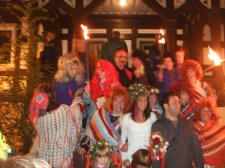 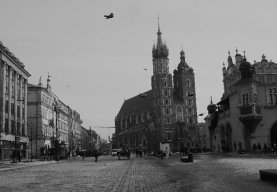